Climate accountability strikes a chord at the Union of BC Municipalities 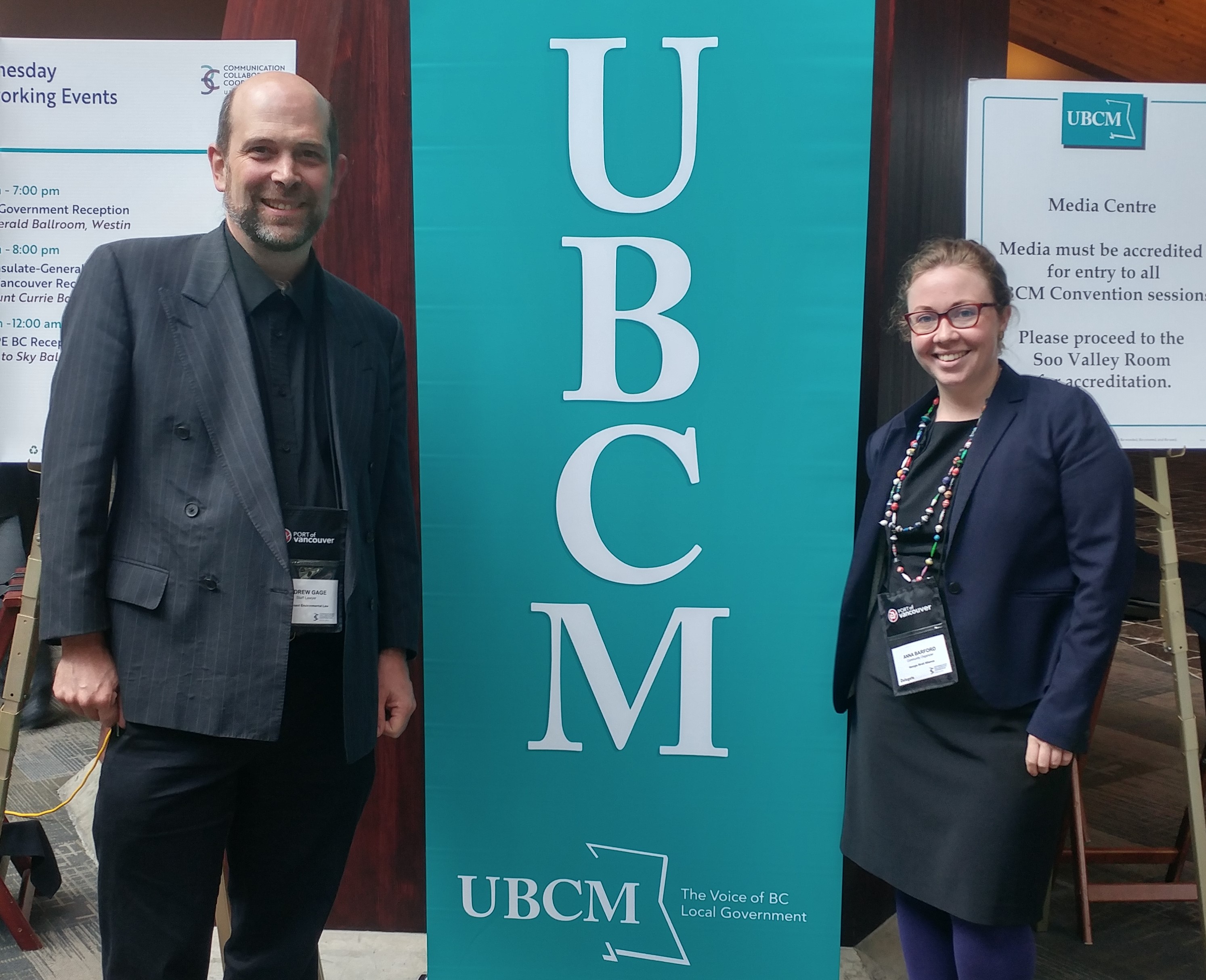 We narrowly lost the vote, but I felt surprisingly good about it.

47.9% of local elected officials at the Union of BC Municipalities (UBCM) voted for the organization, which represents all of BC’s local governments, to send a Climate Accountability Letter to 20 of the world’s largest fossil fuel companies – just short of the majority we needed.

Georgia Strait Alliance campaigner Anna Barford and I had spent the week speaking to mayors, regional board members and councillors from across the province, explaining why it was important to ensure that the costs of climate change not be left to taxpayers. Instead, we believe these costs must be shared with an industry that has made billions of dollars selling the very products that cause climate change.

Despite the narrow loss on the UBCM climate accountability resolution, I found myself celebrating.

Our campaign to hold fossil fuel companies accountable was launched in January 2017 – about a year and a half ago. During that time:

A year and a half ago, the idea of holding fossil fuel companies accountable for climate costs was not a thing. Yet here we were, talking with some of BC’s hardest working and most underpaid politicians (it ain’t easy being a local government councillor or a mayor, particularly in smaller communities) about this issue.

We were perhaps a dozen votes away from having the UBCM, representing all of BC’s local governments, send a letter to global fossil fuel companies demanding that they pay their share of local climate costs.

It is useful to look at some of the arguments that were raised at UBCM, both for and against sending Climate Accountability Letters. There were clearly deeply held views on both sides. When resolutions are debated, the UBCM chair alternates between “Pro” and “Con” speakers.

The debate was started by the City of Victoria, represented by Councillor Ben Isitt, as the original sponsor of the resolution:

We’re already experiencing millions of dollars of costs, and over the course of just the next few years and decades we’ll be experiencing billions of dollars of costs. So this resolution is about fairness. It’s about asking our organizations, the UBCM and the [Federation of Canadian Municipalities], to communicate to the companies that we want to have that discussion, that we want to figure out how those costs are apportioned, so that our taxpayers aren’t on the hook for 100% of the costs of climate change.

This statement was followed by Julian Fell, a director with the Nanaimo Regional District, speaking against the resolution. He wanted to tell us that climate change is not human-caused.

Given that Exxon’s own scientists were beginning to accept climate science in the 1950s (with increasingly accurate projections by 1982), I will admit to being a bit shocked when Fell’s claims received a round of applause from a number of delegates. Clearly, even as communities pay for the costs of building infrastructure that will withstand climate projections – such as more intense rainfall events and rising sea levels – there are still elected officials who are convinced that human societies haven’t contributed to these changes.

Adrian Carr, from Vancouver, went to the “Pro” mic to point out that every community in BC has seen the impacts of climate change in recent years:

In terms of climate change, how many of you have not felt the impacts of climate change in your communities? Whether it’s fires this summer, the smoke of which affected virtually everyone in this province, every single one of our communities. How many of you have not felt the impact of more severe winter storms? In Vancouver and the coastal areas it’s weather, more severe storms in the winter; its hotter, drier summers. Every one of you in your regions knows what those impacts are. Whether it’s on the health of your people, whether it’s on the forests, whether the ability to grow food in agriculture.

We need to request, just as they did with the tobacco industry, we need to make sure that those who got rich off of the selling of those fossil fuels pay their fair share, so that we as communities do not have to pay for their mess.

It was perhaps bad timing that the first two speakers in favour of the resolution were from urban centres, as the tone of the debate took on an “urban versus rural” undertone, even though  smaller communities like Rossland, Castlegar, Sooke and Powell River have all sent Climate Accountability Letters.

The next “Con” speaker was Al Siebring, North Cowichan councillor (who is also running for mayor in the coming election):

The resolution before us puts two very large elephants into this room. First of all, it comes to us from the City of Victoria, a jurisdiction which unlike virtually every other municipality represented here is literally dumping millions of litres of sewage into the ocean. … but they want us to support this exercise in finger wagging about environmental responsibility. I’m sorry. I would submit that if we pass this we’ve lost any sense of proportion or perspective and we’ve completely forgotten the meaning of the words irony or hypocrisy.

The second elephant in the room is, I’d simply ask, how many people here walked to Whistler? How many rode your bicycles? Folks, I’m tempted to propose an amendment … [which] would simply read that we write a letter to the 20 fossil fuel companies in question thanking them for providing the means for us to come together at this convention.

Both of these “elephants” relate to the perception that we can’t talk about building a fairer world unless we are perfect; that we can’t ask questions about the major causes of climate change and the system we are part of while our individual lifestyles contribute to environmental challenges.

However, the Climate Accountability Letters sent by local governments don’t say that fossil fuel companies should pay 100% of climate costs. Rather, they have explicitly acknowledged that we live in a fossil fuel dependent society while opening the conversation about what share of the costs should be borne by taxpayers, and what portion by fossil fuel companies.

There is nothing hypocritical or ironic in trying to sort out the fiscally responsible and practical question of how we are collectively going to pay for looming climate costs caused by our fossil fuel economy. The alternative is that we, as taxpayers, pay 100% of those costs while the fossil fuel industry pockets the profits.

Councillor Siebring is on the record as agreeing that we should spend taxpayer money on preparing for climate change, but is skeptical that the fossil fuel economy has anything to do with it, so it is perhaps understandable that he doesn’t think we should be invoicing the fossil fuel industry for those costs.

Mayor Ken Williams of the District of Highlands, which was the first BC community to send a climate accountability letter, then spoke in favour of the letter.

Unfortunately, I did not get the name of the next speaker opposing the resolution. He said, first:

Although we say it’s just the fossil fuel companies, it’s really aimed at all resource companies. So who’s next? Is it the transportation industry, is it the agricultural industry? Who’s next that these folks will aim their target on?

I understand this comment to be suggesting that the costs of climate change are caused not by any one industry, but by a range of industries (although he could be just suggesting that we’re generally anti-industry). It is, of course, true that fossil fuel use is so ingrained in our society that no industry (or individual) can claim to be entirely innocent of producing any greenhouse gas emissions.

At the same time, the fossil fuel industry is unique among industries in that it is actually responsible for removing fossil fuels from the ground. Without that step, emissions from burning that oil, gas or coal could not occur.

The “Con” speaker went on to argue that resource industries, including fossil fuel companies, “provide a large volume of taxes to this province that help us to pay for hospitals, and teachers and schools, and the social programs that they have up there.”

We don’t believe that industry should feel free to pollute and to profit from pollution, simply because they pay taxes. Renewable energy companies also pay taxes, but they are building a better world. Plus, we are working to hold global fossil fuel companies accountable for climate costs – not just the fossil fuel companies that pay taxes in BC or even Canada.

Rob Southcott of Powell River was the last speaker before the UBCM delegates called the vote. He emphasized that in order to survive in an age of climate change, our communities need to be adaptable, and asked the delegates to support the resolution.

The UBCM delegates then voted, narrowly defeating the resolution.

The Union of BC Municipalities was formed in 1905 to bring together the local governments of British Columbia. In that year, the amount of greenhouse gas emissions from fossil fuel pollution across the entire planet was 663 megatonnes (MT), which is slightly less than Canada’s annual fossil fuel pollution today.

In more than a century since then, society has changed dramatically, becoming remarkably more dependent on fossil fuels.

In 1957, scientists working for what would become ExxonMobil began publishing articles that accepted the science of climate change, and by the 1980s they had a solid understanding of the harm being caused by their products. As energy leaders, these companies had patents on solar cells, low-emission vehicles and other technology that could have moved communities away from a fossil fuel model. But instead of developing those patents, they chose to lobby against climate action and invest in public misinformation about climate science.

After more than a century of the UBCM, the heat-trapping blanket of fossil fuel pollution around the globe has become ever thicker, and as a result, the impacts of climate change are becoming clearer. Elected officials are facing the new question of whether to pass those growing climate costs on to their taxpayers, or to begin working to hold the fossil fuel industry accountable for some of those costs.