It’s not too late for a Site C exit strategy 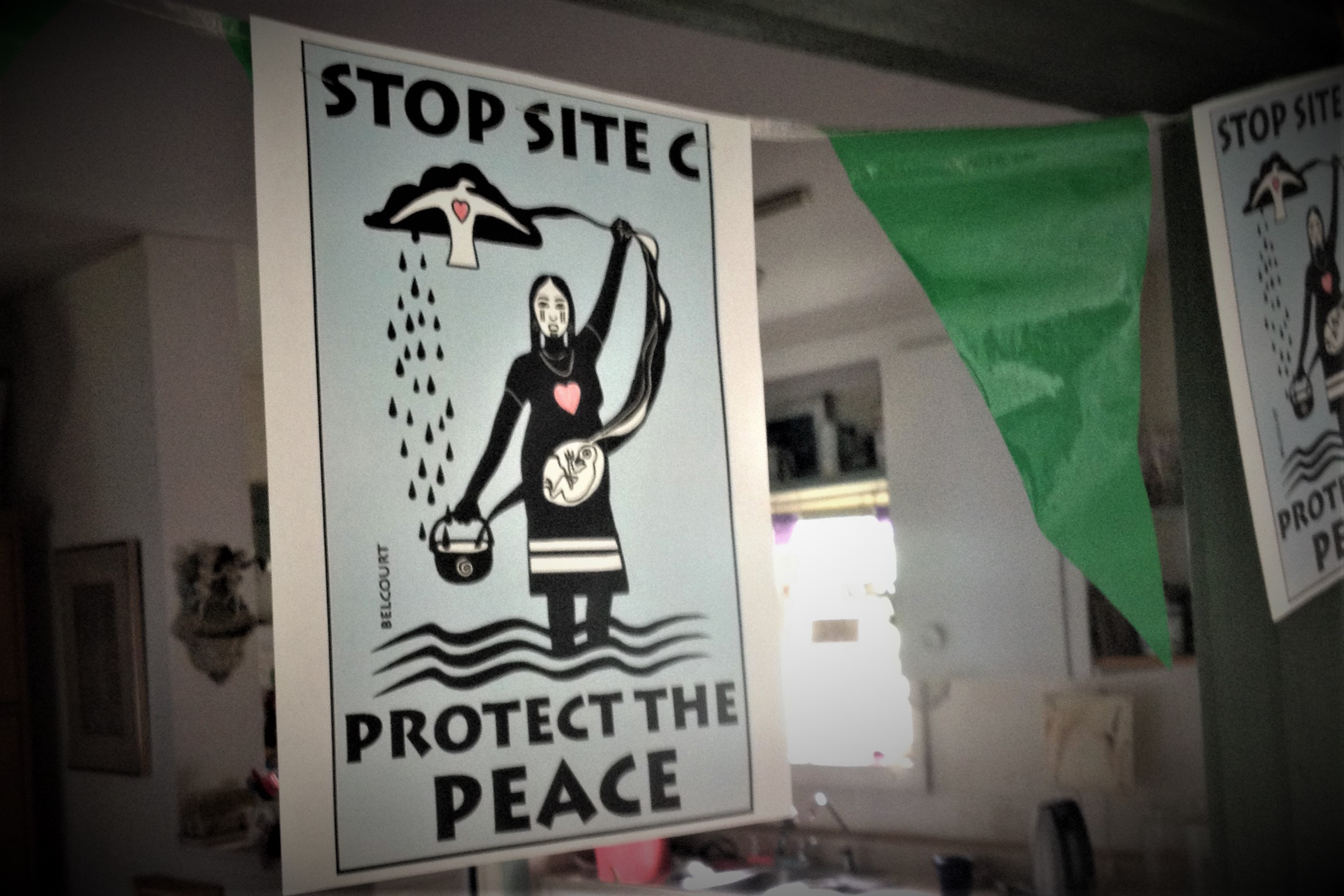 Lately, my colleague Georgia Lloyd-Smith and I have been thinking a lot about the Site C dam. I wrote about it in August 2016 and since then, there’s been so much destruction of the Peace River Valley and billions of dollars more have been spent.

I hear the number $3 million a day and it stops me in my tracks to imagine:

What else could be done with $3 million a day? I envision spending those millions on solar, wind and geothermal. Also, on housing, public transit, hospitals, clean drinking water on reserves and education.

This imagining reminds me of the Great Turning, described by ecofeminist, systems theorist and philosopher, Joanna Macy. Macy describes the Great Turning as that shift from the Industrial Growth Society to a life-sustaining civilization, “a global awakening of the dis-ease of our planet, our love of life and the revolution that can heal our world.”

Georgia and I put Site C on the agenda for a WCEL lawyers’ meeting hoping there was something more each of us could do. West Coast’s involvement on this issue over the years has focused primarily on enabling legal support to impacted communities. We were deeply involved in the environmental assessment of Site C by providing legal aid through our Environmental Dispute Resolution Fund (EDRF), and Staff Lawyer Anna Johnston’s representation of the Peace Valley Environmental Association in the assessment, and the EDRF has also supported legal challenges by West Moberly First Nation to the Site C project.

Now, with BC cabinet ministers mulling over the increasing risks and skyrocketing costs of this mega-dam, it’s a critical time to speak up and urge them to halt the project before more damage is done.

There are so many reasons to get involved in stopping the Site C dam. To start off with, giant dams are not clean.

There’s all that methane and mercury from decomposing trees like what happened in the W.A.C. Bennett Dam’s Williston Reservoir, still considered a dead zone decades after it was created.

There are the mounting costs, financial risks, comparisons made to Muskrat Falls and “boondoggles,” and of course the lack of transparency and secrecy. For example, a recent report by Peter Milburn – commissioned by the BC government to review the project’s risks, construction delays and rising costs – has yet to be made public. Why can’t the public see the report? What are they afraid to show us?

In late January, West Moberly First Nation sought a court order to require the Province to release documents related to geotechnical and safety problems. Now the Premier has commissioned two additional reports concerning geotechnical issues and safety for workers and the public.

There’s the ongoing violation of Treaty 8 and the objections and legal actions of the West Moberly First Nation, and also the neglect of the Truth and Reconciliation Commission (TRC) recommendations and the UN Declaration on the Rights of Indigenous Peoples (UNDRIP). For heaven’s sake, the United Nations has already rebuked Canada for Site C three times.

I’ve heard agrologist Wendy Holm connecting the need to stop Site C to important reminders of food security. She speaks about the alluvial soil, the valley’s southern exposure, and the long summer growing days that together give the Peace River Valley the name “BC’s Bread Basket”.

BC Hydro and the government seem determined to make this valley into a sacrifice zone. In what was once a bountiful, biodiverse region, there’s now a huge scar on the landscape. 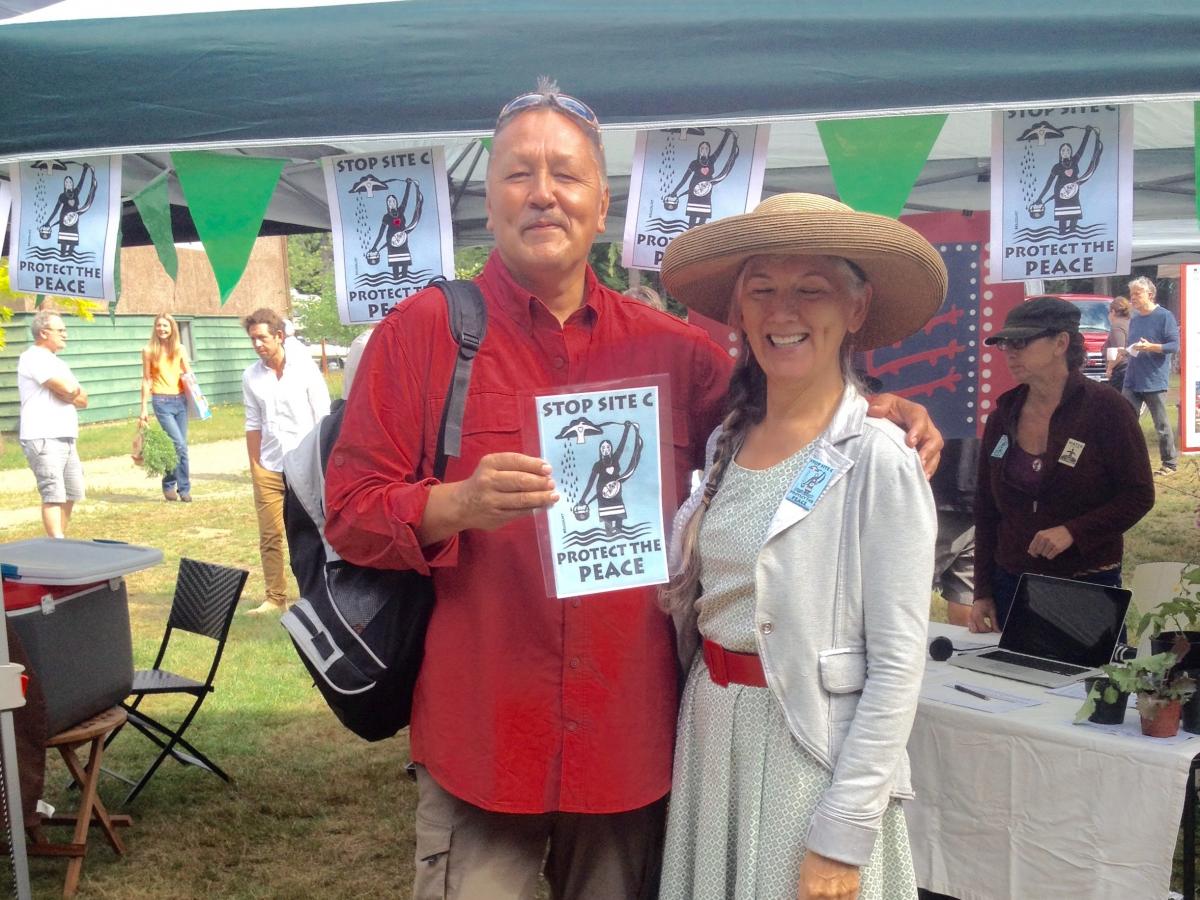 Where do we go from here?

Georgia and I developed a personal response – write to our MLAs and the Premier. After the recent appointments of BC Cabinet Ministers, I reviewed mandate letters to see who we should be addressing our letters to. Every one of the mandate letters I’ve reviewed includes something that could connect the ministers towards developing and implementing a Site C exit strategy.

Aren’t they all supposed to be working towards “lasting and meaningful reconciliation”? Implementing the BC Declaration on the Rights of Indigenous Peoples Act? Doing what’s in the best interests of British Columbians?

Our letters go unanswered or we get automatic replies and feel as though we’re writing into a void.

Sometimes we feel discouraged and alone in our worrying. While there’s been lots of excellent coverage by The Narwhal, consistent press releases from Chief Roland Willson of West Moberly First Nation and the UBCIC, and persistent messaging from locals in the Peace River Valley area, there’s been relatively little coverage by mainstream/corporate media.

Our pleas to friends and acquaintances to get involved are sometimes dismissed. People feel busy or, maybe, it’s the reality of being in the second wave of a pandemic; people feel as though they have enough to worry about.

Maybe they too are discouraged, or think that Site C is a done deal, that former Premier Christy Clark succeeded in her goal of getting it “past the point of no return.”

Or maybe they believe the Orwellian messaging (the “Site C Clean Energy Project”), that we need the power to electrify the province so we can drive electric vehicles or heat our homes. In this info war, it’s essential to dispel the myth that mega-dams are a climate solution. We know from the British Columbia Utilities Commission that clean energy goals can be achieved by other means.

As Georgia and I are left writing this blog, I fall back on other strategies for coping with my despair.

Acknowledging our ecological grief – and not turning away

I’ve studied and co-facilitated Joanna Macy’s “Work That Reconnects” and have found it helpful for responding to ecological grief – including the heartbreak around Site C.

In my blog from August 2016, I described how my heart was opened though my first-hand connections with the kids in Tsay Keh and learning of the human, animal and territorial sufferings resulting from the Bennett Dam. Georgia spent time in the Peace Athabasca Delta learning from elders from the Mikisew Cree First Nation and witnessing herself how the Bennett Dam has disrupted the flow of water so drastically that entire lakes disappeared. The elders spoke longingly of the “pre- Bennett” times, like how we refer to the “pre-COVID” times.

Years later, we can’t forget the suffering from the Bennett Dam and we recognize the connections with the present-day suffering with Site C. Sometimes we’d like to forget this is going on. The COVID-19 pandemic is hard enough, and being awake to the destruction in the Peace River Valley feels overwhelming.

There are many reasons why we close our hearts, why we turn away from thinking about environmental destruction or climate change or Site C. It’s depressing. Or we feel powerless because we don’t know what to do, or it’s beyond what we’re able to cope with. Maybe we don’t want to disturb the status quo, or we feel like there’s no point and we’ve lost hope.

I’ve learned to acknowledge my feelings of dread, rage, sorrow, guilt and agree with Joanna Macy that deliberately facing this pain can be liberating. “Pain is actually a wholesome response that comes from our caring and our connectedness; it says we are compassionate human beings.”

In her work, Macy invites us not to turn away but instead to practice naming our feelings. A typical Joanna Macy workshop includes safe opportunities to acknowledge our pain for the world by working with sentence stems such as, “When I see what’s happening to the natural world, what breaks my heart is…” or “Feelings about all this that I carry are…”

We witness each other’s heartbreak (“We hear you.” “We’re with you.”) and learn that our open hearts can hold the whole universe. We deepen our connection with others, embolden one another, hold each other up when we feel despair.

In my deliberately not turning away, I’ve connected with other co-conspirators. We agree, unite, plot about wanting to protect the Peace River Valley. But also, literally we conspire, breathe together because sometimes that’s all we can do: breathe and pray. This breathing and praying and staying present comes between the other actions where we draft and sign letters, try to mobilize others, raise funds to support legal actions or participate in webinars. We even try to track down Jane Fonda.

A friend posted on Twitter about the impact of Site C on a spectacular and rare hillside wetland called a tufa seep. I looked up “tufa seep” and learned this seep likely took thousands of years to form, making it older than the Hanging Gardens of Babylon and the Great Wall of China.

My friend had made an altar, laid down tobacco, eucalyptus, dried rose petals and sage. And in a bowl some clean, pure water from the same magical, ancient tufa seeps which were destroyed this past winter in the Peace Valley. She told me: “We are some of the last people to have ever experienced them, I’m heartbroken to say.”

It’s not too late

For those of us who still want to stop Site C, it’s important to remember it’s not too late. In fact, when it comes to hydro-electric dams, it’s probably never too late.

Remember the Elwha River? The lands, waters, fish and animals are now thriving along this Washington waterway, after two large dams were removed to restore endangered salmon habitat – making it the largest dam removal project in U.S. history.

There is still time for BC to reverse course and avoid the ever-rising impacts and costs associated with Site C. You can remind BC decision-makers of this fact by signing petitions, making calls or sending letters (see here, here or here).

No matter how this story unfolds, I want to be a good ancestor to my descendants. I want my grandchildren to know I did everything I could. I wrote letters and blogs. I organized petitions, made buttons and art installations. I talked to friends and neighbours and when they were young, I reminded my children of the kids in Tsay Keh and the price they paid for that so-called cheap electricity.

I did winter ocean dips dedicated to courage, and especially to the courage it would take for cabinet ministers to develop an exit strategy.

And sometimes I prayed.

Our mother who art underfoot,
hallowed be thy names.
Thy seasons come, thy will be done,
within us as around us.
Thank you for our daily bread, the water, the air,
and our lives and so much beauty.
Lead us not into selfish craving and the destructions
that are the hungers of the glutted,
but deliver us from wanton consumption
of thy vast but finite offerings.
For thine is the only sphere of life we know,
and the power and the glory, forever and ever.
Ha-em