Lessons on marine conservation from the bottom of the world 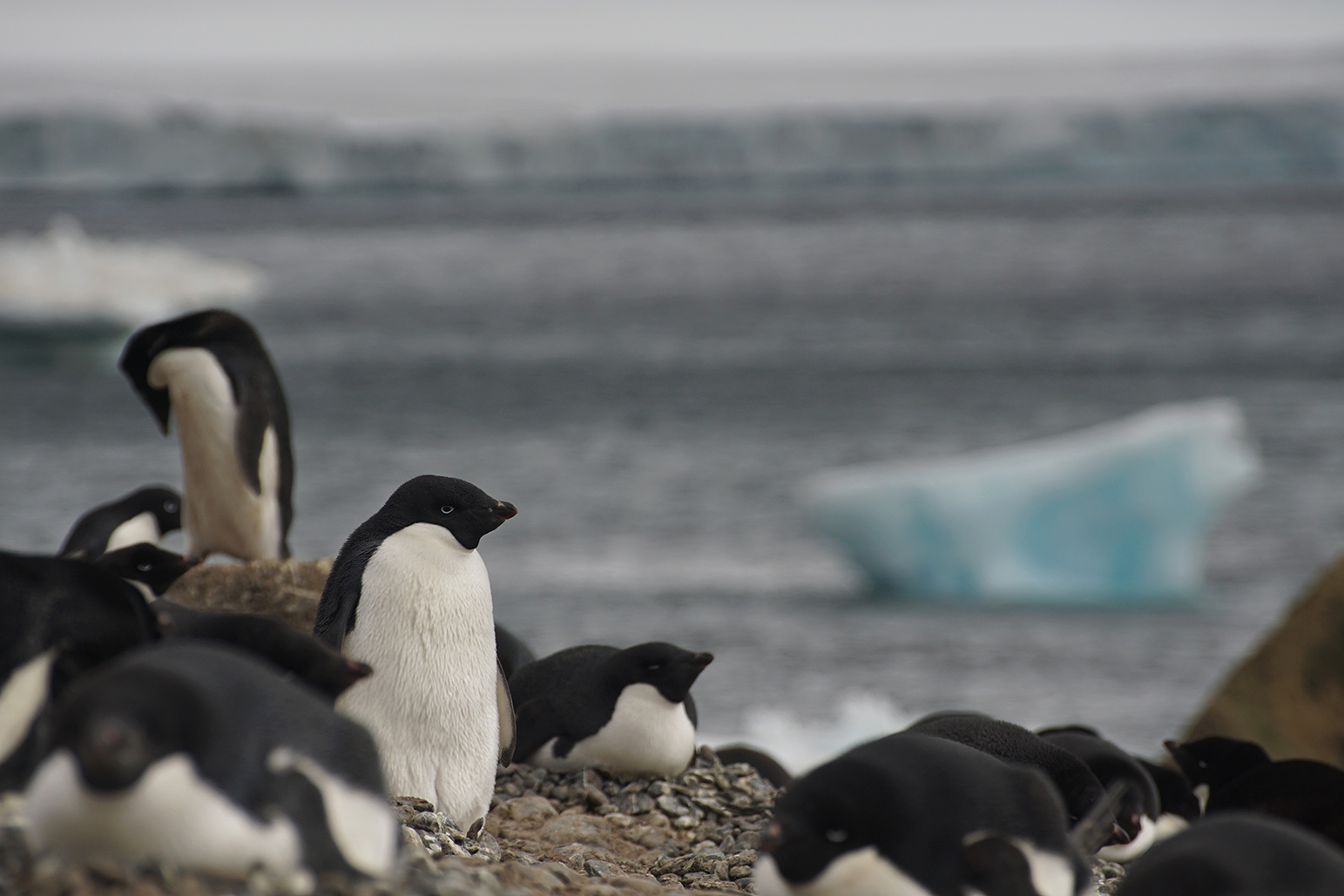 A colony of nesting Adélie penguins on the Antarctic Peninsula. (Photo: Maryann Watson)

A visit to a colony of penguins can overwhelm your senses. A cacophony of calls between penguin partners as they trade off their egg- or chick-guarding duties bombards your ears, the sharp smell of guano from their diet rich in fish and krill fills your nose, and your eyes can barely take in all the incredible sights of hundreds of these extraordinary birds going about their day with little care or attention for the human visitors watching them.

A steady line of penguins moves up and down between their nests and the ocean on paths packed down in the snow. These ‘penguin highways’ are in motion, all day, every day, for the duration of the nesting season. And while penguins may look awkward on land – often waddling and hopping along with their fin-like wings outstretched for balance – the torpedo-shaped form of these birds becomes clear as soon as they enter the water and speed away through the shallows to hunt. Clearly, this bird was built for life in the sea.

This past January, during the austral mid-summer, I visited the Southern Ocean and the Antarctic Peninsula as part of a shipboard expedition guide team. I was astounded each day by the life and abundance I saw.

Antarctica’s wildlife have a ubiquitous dependence on the sea. Elephant seals, hauled up on the shore taking a short break from their oceanic lives, spend around 80-90% of their lives in the ocean and can dive to depths of 1500 m to hunt for fish and squid. Groups of humpback whales arriving from Central America finish the longest migration of any mammal on Earth in the Southern Ocean to feed on the abundance of Antarctic krill that blooms as the sea ice recedes each summer. We also saw leopard, crabeater and Weddell seals, and crossed paths with other whales including Minkes, fins, sei and orcas. 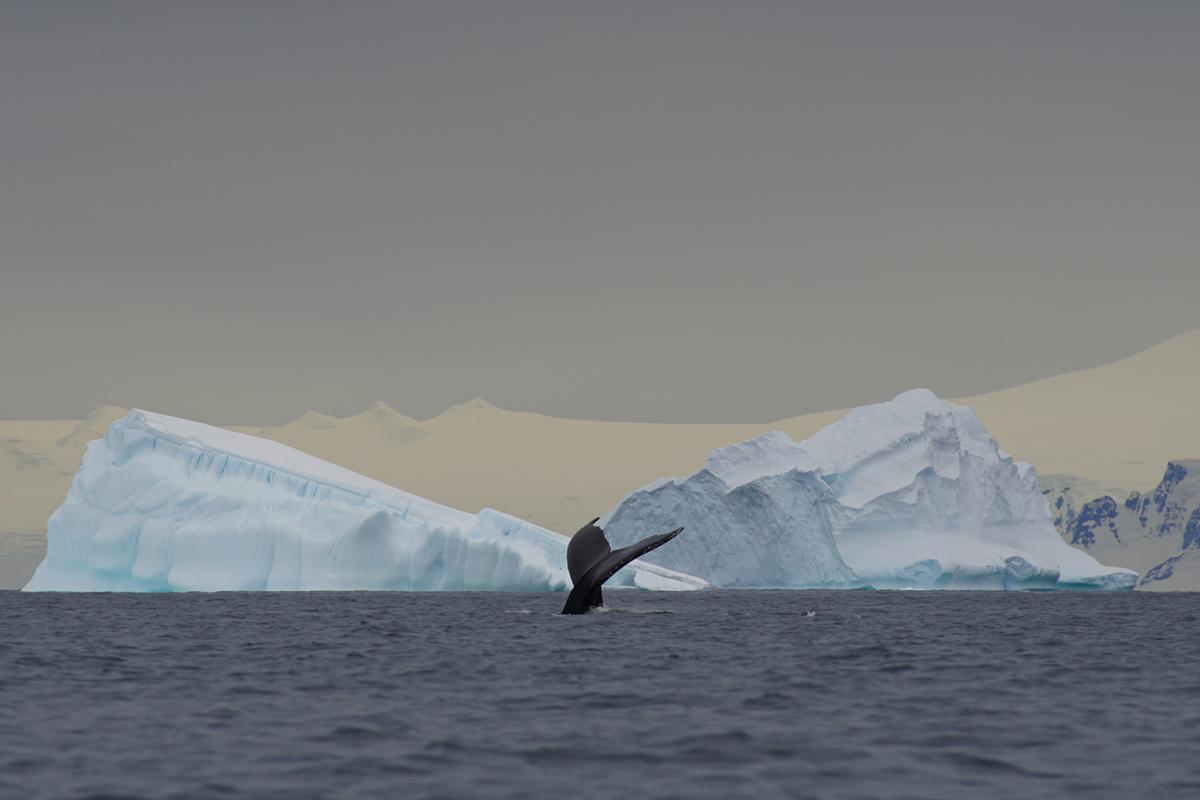 A humpback whale dives deep on the bottom of the world. (Photo: Maryann Watson)

While life in Antarctica is not particularly diverse in terms of number of species, the biomass and sheer numbers of animals supported by the Southern Ocean is amazing. The extreme conditions that this region experiences have also resulted in one of the highest rates of unique species among marine ecosystems – there are estimated to be over 9000 species here that are found nowhere else on the planet, and new species are continually being discovered.

A study in 2008 determined that Antarctic marine ecosystems are some of the last areas unaltered by human activities. But the region is not a completely pristine wilderness.

The first commercial fisheries in Antarctica in the 19th and 20th centuries hunted whales and seal populations to near extinction. As these large animals dwindled, fisheries turned their attentions to the abundant prey of whales and seals – krill and fish. Today, fishing continues in the Southern Ocean for Antarctic toothfish and Antarctic krill.

Tourism to Antarctica is growing exponentially; last year 45,000 tourists visited the continent. And the Antarctic Peninsula is experiencing some of the fastest changes due to global climate change on Earth.

A continent devoted to peace

Antarctica is a globally unique area – in its environmental conditions, array of wildlife, and in the way people govern and manage activities the area.

The Antarctic, and the waters of the surrounding Southern Ocean, are not under the authority of any one country. In 1959, twelve countries with claims to the area became signatories to the Antarctic Treaty and established Antarctica, and the Southern Ocean south of 60o, as a place for scientific research and cooperation without any recognition or renunciation of any of their territorial claims. The Treaty’s Preamble recognizes that “it is in the interest of all mankind” for Antarctica to “continue forever to be used exclusively for peaceful purposes.”

In 1991, the Environmental Protocol was created under the Treaty, designating the Antarctic environment, and dependent and associated ecosystems “as a natural reserve, devoted to peace and science.” The Protocol prohibits the disposal of any plastics or other garbage into the sea, as well as any activity related to mineral resource activities, other than for scientific purposes. All other activities are subject to assessment of environmental impacts.

While many countries work to establish marine protected areas (MPAs) in the oceans within their jurisdiction, just as we are here in Canada, the Antarctic Treaty signatories have also been working to establish MPAs around Antarctica. Through the Commission for the Conservation of Antarctic Marine Living Resources (CCAMLR), these partners are setting important precedents for international cooperation on marine conservation, including establishing some of the world’s largest MPAs:

While I was down in the Southern Ocean, we visited another of the world’s largest MPAs – the South Georgia and Sandwich Islands MPA. Lying within the flow of the Antarctic Circumpolar Current that surrounds the Southern Ocean, this region was identified as a priority area for protection due to its importance for biodiversity. Regulations for this MPA include a ban on all bottom trawling fishing. There are also multiple coastal areas within the MPA that restrict all fishing to protect important feeding areas which support an incredible abundance of breeding seabirds and marine mammals such as albatross, king penguins, fur seals and elephant seals. 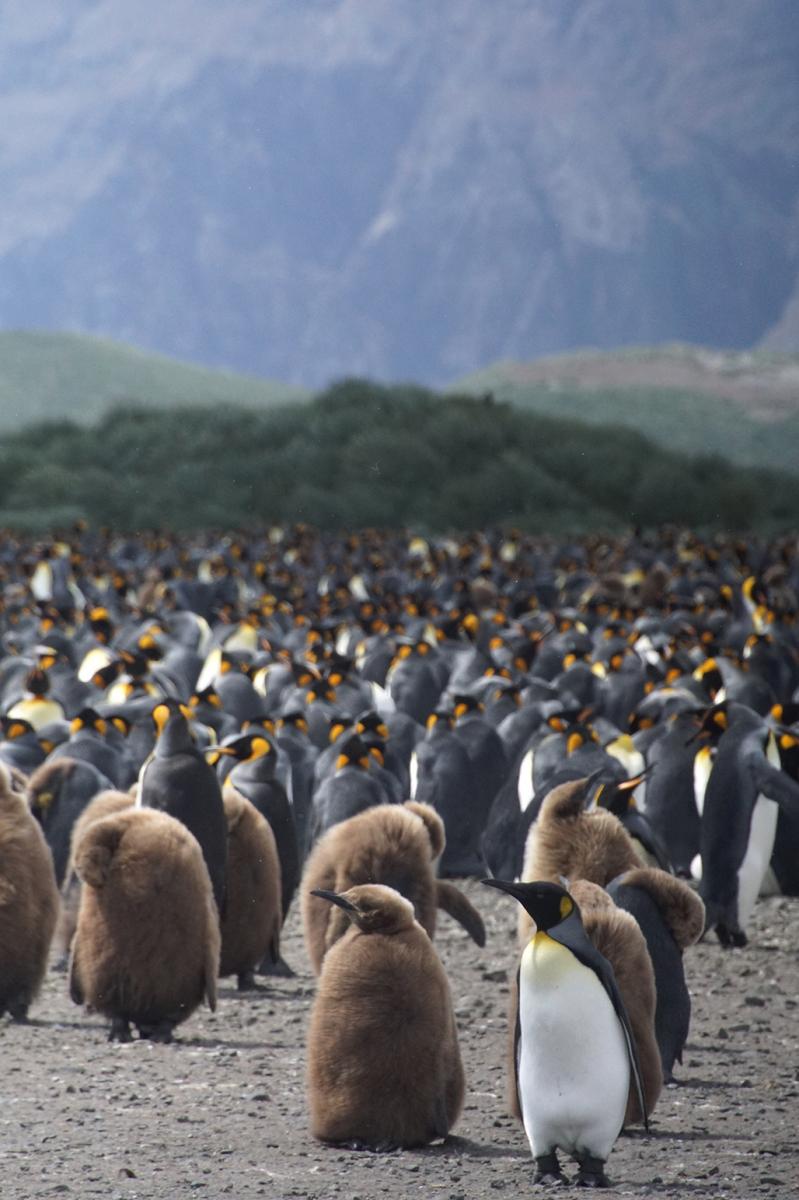 Hundreds of thousands of King Penguins breed on South Georgia, a critical breeding area for this species. (Photo: Maryann Watson)

What can we learn from Antarctica’s marine protection experiences?

Visiting an area that is so charged with marine life is a stark reminder of the need to ensure our own activities are balanced with the needs of ocean ecosystems. Important lessons can be learned from conservation initiatives designed for the unique area and life at the bottom of the world – about how countries can work together to support protection of marine ecosystems in international areas, and for our own marine protection efforts here at home.

Proposals for additional MPAs within the Southern Ocean are also under consideration, but progress has been slow. Similarly, establishing MPAs in Canada has generally taken between six and ten years from concept to final designation, leaving vulnerable areas and the wildlife unprotected as negotiations proceed on boundaries and management plans.

The Canadian government’s new efforts to prioritize MPAs have led to significant progress recently. Canada’s primary legislation for establishing MPAs – the Oceans Act – is being amended and includes proposals to include interim protections for areas while discussions on protections are underway.

These are heartening initiatives. However, the activities permitted within Canada’s MPAs are still inconsistent, and there are no minimum standards for what activities should be prohibited when a protected area is established.

That’s why we’re calling for minimum protection standards for Canada’s MPAs that would ensure consistent protection for marine ecosystems within protected areas.

Seeing the sheer richness of life in a part of the ocean with minimal human interference is a reminder of what we stand to lose if we don’t take better care of the oceans. Marine protected areas are working in Antarctica to preserve that area’s unique species and habitats. To protect the full range of the world’s ocean biodiversity, we all need to act.