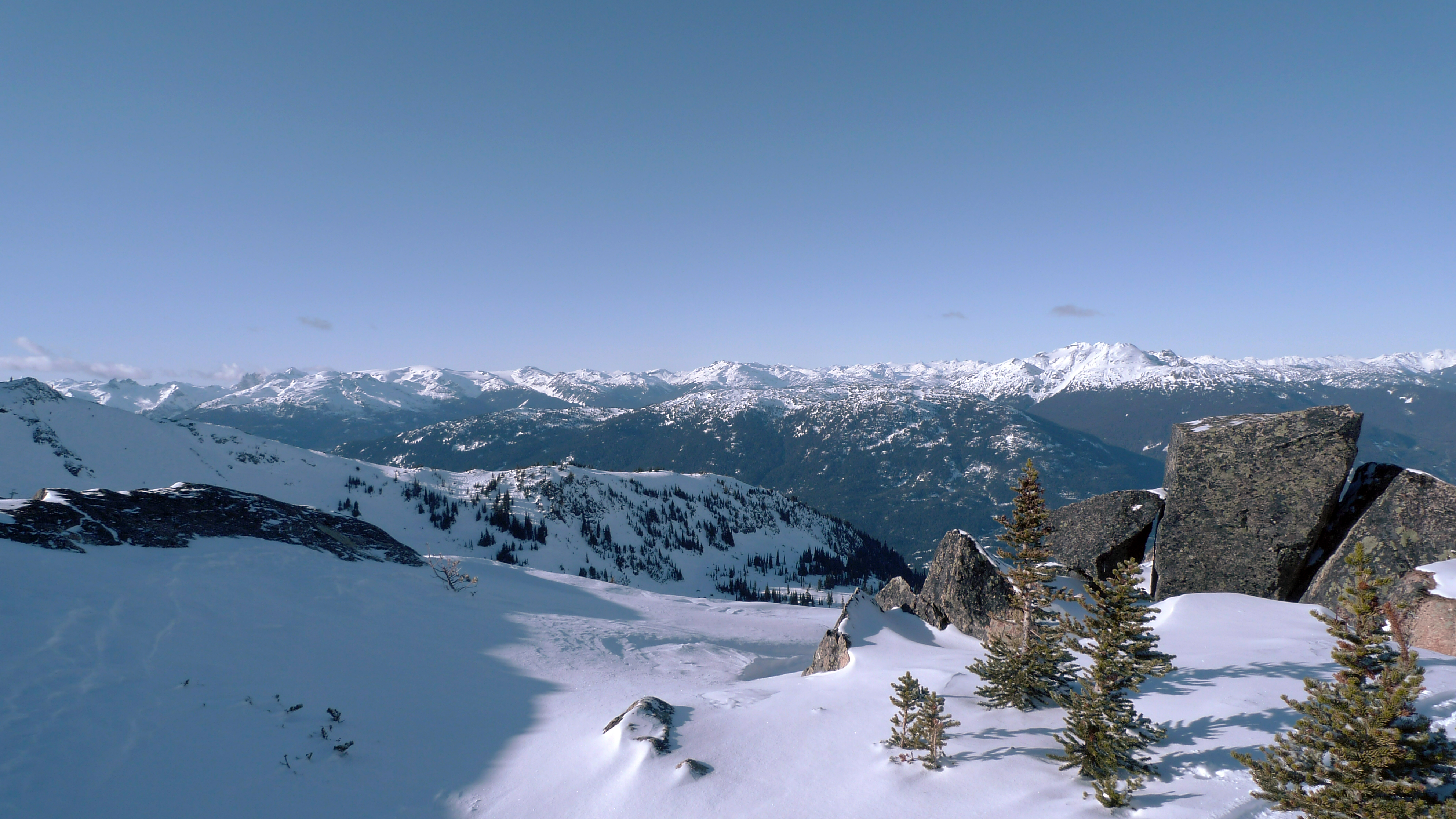 A large majority of Canadians believe that fossil fuel companies should pay a fair share of the costs of climate change, rather than leaving all of the costs of wildfires, floods and rising sea-levels to taxpayers. But you wouldn’t know it from the howls of outrage, ridicule and indignation that has been piled on the resort municipality of Whistler over the past week for suggesting just that.

With no less than Alberta UCP Leader Jason Kenny now weighing in – falsely criticising both Whistler and West Coast Environmental Law for targeting Alberta industry, we’re releasing our polling data which establishes that Mr. Kenny and the other #BoycottWhistler campaigners are on the wrong side of public opinion.

If you think that taxpayers should not pay the full costs of climate change while fossil fuel companies pocket the profits: be proud, be loud! Don’t let the fossil fuel industry gaslight us.

Boycott Whistler is the wrong debate

It’s worth noting that the media and social media information about this story has framed Whistler as attacking the Canadian oil and gas industry. These stories failed to recognize that the Climate Law in our Hands campaign is primarily directed at international companies and that Whistler was only one of 16 local governments to send climate accountability letters.

Indeed, we focus so much of our energy on this campaign precisely because we believe that it is possible — based on the law related to trans-national disputes — for BC communities to recover a share of their climate costs from Exxon, Chevron, Saudi Aramco, Shell and other global companies.

If this were just about penalizing Canadian industry (while leaving the international players free to pollute without consequences) we wouldn’t bother. It is understandable that most Canadian climate campaigns focus on Canadian industry – but we need to turn to all levels of government to use all tools at their disposal to hold the global actors accountable.

Chevron is responsible, through its operations and emissions, for 3.24% of human-caused greenhouse gases in the global atmosphere. The top 20 companies are responsible for almost 30% of greenhouse gas emissions. Canadian Natural Resources Ltd. (the Canadian company which received Whistler’s letter) is responsible for about 0.08% of global emissions – significant, but not in the same league. Right now these fossil fuel giants don’t include any community climate costs in their books. Instead, they expect communities around the world to pay 100% of the costs of climate change — sometimes including paying the costs of protecting oil interests from climate change.

That in itself is unjust, and we haven’t even gotten into the history of some of these same companies funding misinformation on climate change, lobbying against climate action, and supressing technology that could have allowed society to reduce its emissions.

Big Asbestos, Big Pharma, Big Tobacco have all learned in the courts that they couldn’t escape their responsibility — even where the consumers of their products also shared some responsibility. Until the fossil fuel industry and its investors realise that they can’t escape responsibility, they will not have any incentive to help us make the massive societal shifts that are needed.

While we believe that it’s possible to sue fossil fuel companies for their share of harm caused by climate change, we think that this is an issue that cannot be left solely to lawyers and court. Whether through Climate Accountability Letters or conversations at the kitchen table, what do Canadians think about the responsibility of fossil fuel companies for climate costs?

In October 2018, we fielded a Google Survey of 1,500 Canadians to test many of these messages nationally.  (Google Survey is an opinion research tool that Google offers to allow market research and polling via on-line users). The Google Survey confirmed that a majority of Canadians in every region including Alberta believe that fossil fuel companies should pay a share of climate-related costs.

Fig. 1 – Google Survey Results – “Thinking now about companies that produce and sell fossil fuels, would you support or oppose these companies paying a share of the community costs of climate change?” 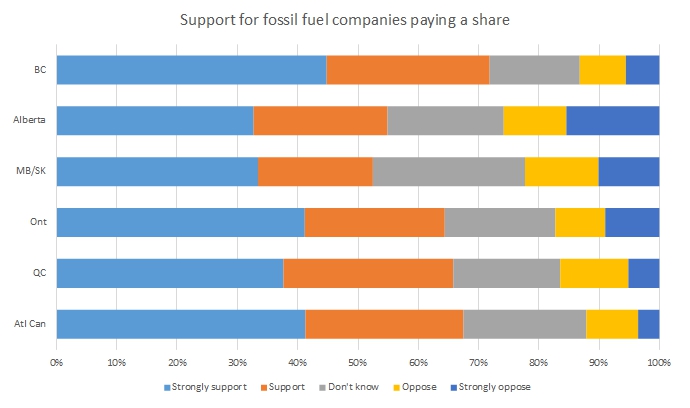 This result is encouraging, but less impressive than the answer to a similar question in a poll of British Columbians that we commissioned Justason Market Intelligence (JMI) to conduct in 2017 which found that 82% of British Columbians strongly or somewhat support holding fossil fuel companies accountable for a share of climate costs.

In the 2017 JMI poll, we also asked British Columbians whether they support their local government sending a letter to fossil fuel companies asking them to pay their fair share of local climate costs. (We didn’t ask this question in the 2018 Google Survey). Again, there was broad support.

Fig 2 – JMI poll results – “Do you support or oppose your local government sending a legal letter to fossil fuel companies demanding that they pay a share of the local financial costs of climate change?” 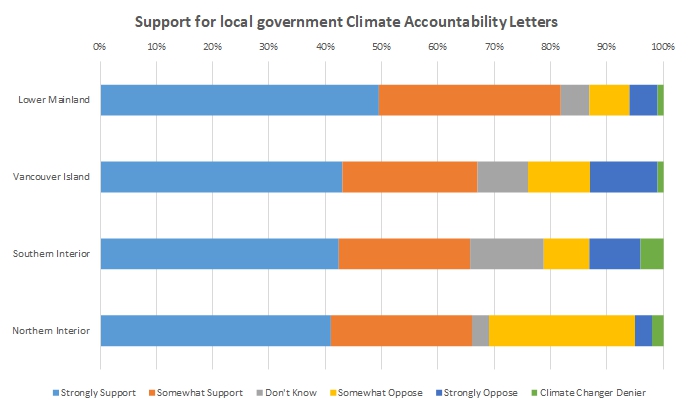 It’s ironic that the Alberta fossil fuel industry has taken such offence at a simple letter from Whistler, because the reality is that Canadians support the idea of their governments actually suing fossil fuel companies. Presumably the support is higher for suing some or all of the top 20, rather than CNRL or other Canadian companies. Even in Alberta, the province with the lowest support for climate litigation in Canada, 38% agree with the idea of using litigation to recover a share of climate costs. In BC, Quebec and Atlantic Canada support for litigation is over 60%.

Fig 3 – Google Survey Results – “Would you support or oppose the government suing fossil fuel companies to make them pay a share of the local financial costs of climate change?” 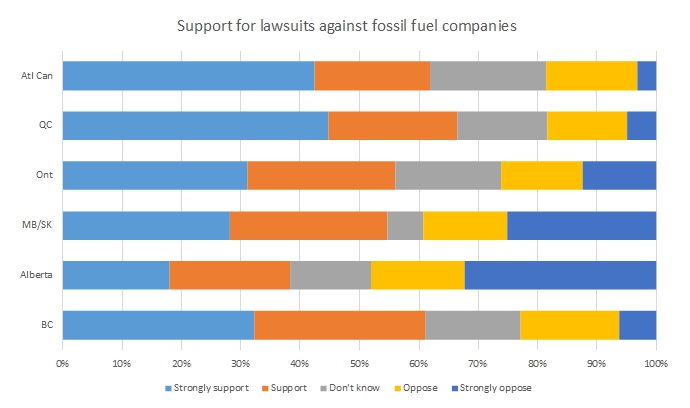 Similarly, the JMI poll found that 63% of British Columbians strongly or somewhat support litigation by their local government to recover a share of climate costs.

The oil and gas industry will be outraged by suggestions that they owe some of the costs of climate change arising from their products. They will argue that consumers – and not producers – of fossil fuels are to blame and that anyone who has not entirely eliminated their own GHG emissions cannot point fingers – a tactic long-used by the tobacco industry and others.

The fossil fuel industry wants wildfires and sea-level rise to be your fault, so that it can keep making profits. Call them out on that. Talk about their role and ask your local government to do the same through Climate Accountability Letters.

The Google survey reached 1,500 Canadian residents and was in the field from October 17th to 23rd, 2018. The poll was conducted only in English. The results above are weighted by age, gender and geographical location. Google survey reaches Canadians randomly and is an online market research tool.

The question on local governments sending climate accountability letters was part of an A/B split, meaning that the unweighted sample for that question represents 654 B.C. residents, which carries a margin of error of +/- 3.8 percentage points 95% of the time.