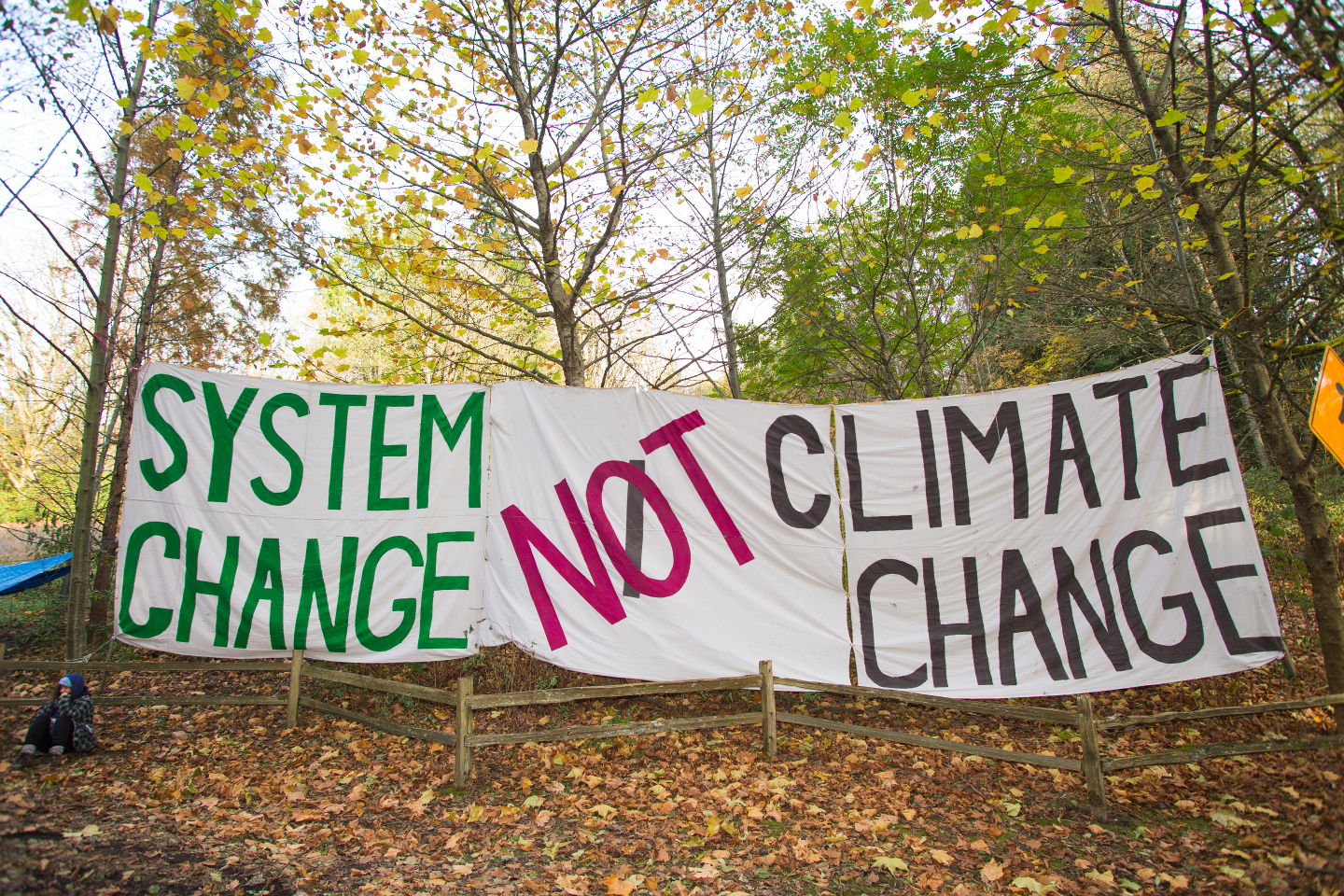 This post is Part 2 in a series about NAFTA and its implications on the environment. Read Part 1 here.

When Canada entered into the North American Free Trade Agreement (NAFTA) in 1994, the world was a very different place. Oil was cheap and plentiful. In Vancouver, gasoline cost less than 60 cents a litre. Climate change was emerging as a mainstream concern, following a major conference in Montreal in 1988 and the signing of the UN Framework Convention on Climate Change in 1992, and members of the public were just starting to grapple with its implications.

Today, of course, the reality is quite different. Average global temperatures have risen by 1 degree Celsius since the pre-industrial era, and the temperature is rising faster in northern regions of BC and Canada. Canada signed on to – and later withdrew from – the Kyoto Protocol, and in 2015 we signed the Paris Agreement. We know that to avoid dangerous climate change we have to cap average global temperature increase at 1.5 degrees above pre-industrial levels. And we know that this puts us on a strict carbon budget – by 2050 we need to be virtually GHG-free in order to meet the 1.5-degree target.

So, does NAFTA help or hinder us in our work to reduce greenhouse gas (GHG) emissions and avoid runaway climate change?

The investor-state dispute settlement (ISDS) mechanism we blogged about previously could have a chilling effect on specific climate policies, but a major part of the answer lies in Article 605 of NAFTA, also known as the “proportionality clause.” This little-known clause limits Canada’s options for GHG-reducing energy export policies.

The wording of the proportionality clause makes it clear that it applies to decisions by governments, not businesses. It allows businesses to make decisions about whether to sell energy resources to foreign or domestic buyers based on market factors, but it prohibits Canadian governments from taking policy action to reduce energy exports while keeping domestic use at the same levels.

Why are we only talking about Canadian energy? Well, the proportionality clause mainly affects Canada’s energy exports. Mexico is not affected because the Mexican government would not sign NAFTA unless it was granted an exemption from Article 605. The US is party to Article 605 but because it is a net importer of energy, it is not as affected.

Now we’re going to get into the legal wording, so if you’re not into that then feel free to skip ahead.

… a Party may adopt or maintain a restriction… with respect to the export of an energy or basic petrochemical good to the territory of another Party, only if:

a) the restriction does not reduce the proportion of the total export shipments of the specific energy or basic petrochemical good made available to that other Party relative to the total supply of that good of the Party maintaining the restriction as compared to the proportion prevailing in the most recent 36 month period for which data are available prior to the imposition of the measure…;

b) the Party does not impose a higher price for exports of an energy or basic petrochemical good to that other Party than the price charged for such good when consumed domestically, by means of any measure such as licenses, fees, taxation and minimum price requirements…; and

Article 605(a) means that the Canadian government cannot impose restrictions on energy exports unless we make available to the US the same share (proportion) of our oil, natural gas, coal, electricity, and refined petroleum products as we have in the preceding three years. Currently, that share is over 50% of our natural gas output and about 75% of our oil production. So if Canada reduced oil exports to the US, we would have to reduce the amount of oil available for domestic consumption as well, to make sure the US had first access to about 75% of the total amount of Canadian oil still available on the market. Again, this article applies to the government, not to businesses. Canadian energy producers are free to sell their products as they see fit.

Essentially, 605(b) means that the Canadian government cannot impose an export tax on energy exports to the other NAFTA parties if that tax results in them paying a higher price than we pay for that energy domestically. The interesting wrinkle here is, once a Canada-wide carbon tax is in place for energy that we burn domestically, it will result in a higher price paid for fossil fuel resources consumed at home than for those we export. So a question we have is whether Art. 605(b) would allow an exit tariff on fossil fuel exports if it were in line with the national carbon tax.

Article 605(c) appears to have been crafted in reference to the National Energy Program of the 1980s. Political economist Gordon Laxer explains that Article 605(c) is a “caveat that effectively says that in meeting [Article 605’s other] requirements an exporter cannot disrupt ‘normal channels of supply’ or ‘normal proportions among specific energy or basic petrochemical goods’ by, for example, substituting a heavy grade of crude for a lighter variety.” Article 605(c) would make it difficult, if not impossible, for the Canadian government to divert oil from pipelines running south to the US to other pipelines running to Eastern Canada.

The bottom line is, under NAFTA if the Canadian government takes steps to reduce energy exports to the US we also have to reduce the amount of energy available for our own consumption. NAFTA’s proportionality clause limits the Canadian government’s ability to make policy around energy exports and locks us in to a free market model. The problem with the free market model in this case is that successfully addressing climate change will require government intervention to reduce GHG emissions and correct the greatest market failure the world has ever seen.

NAFTA’s proportionality clause has serious implications for Canadian energy sovereignty and security. “Energy sovereignty” means that Canadian governments get to make the decisions about the best uses of Canadian energy sources. “Energy security” means that we have access to enough energy that we don’t risk freezing in the dark. The proportionality clause constrains both.

For example, if there were a global oil shock as in the 1970s, NAFTA’s proportionality clause means that the Canadian government could not institute a policy to cut back on our exports to the US and redirect that energy to eastern Canada, as we did then.

Let’s delve a little deeper into the proportionality clause’s interplay with the Paris Agreement and Canada’s largest source of emissions, the oil sands.

Under the Paris Agreement, Canada has pledged to reduce greenhouse gas emissions to 30% below 2005 levels by 2030. Emissions were at 747 megatonnes in 2005, so to meet our Paris targets emissions have to be down to 523 megatonnes per year by 2030. An April 2017 report from the federal government shows a decrease in overall emissions to 722 megatonnes (as of 2015), but reports by the UN Environment Program and independent watchdogs show that even so, we will miss our Paris targets by a wide margin (see Climate Action Tracker, for example).

One way we could meet our Paris commitments would be to phase out the largest source of GHG emissions in Canada – the oil sands. Alberta’s Climate Leadership Plan currently allows oil sands emissions to grow to 100 megatonnes per year, from 68 megatonnes in 2014. Producing bitumen from the oil sands is so GHG-intensive that we cannot allow oil sands production to grow as projected and still meet our Paris commitments unless the rest of the economy reduces GHG emissions at a drastic rate.

Imagine the oil sands begin to be phased out today, and we then rely on conventional oil and gas as transition fuels until we have fully decarbonized our economy. The proportionality clause will kick in, requiring us to make available the same proportion of our total oil and gas supplies to the US as in the preceding three years. Yes, presumably we would be aggressively working to reduce our domestic oil and gas use as well, but being forced to give the US first access to 75% of our remaining supply of conventional oil and 50% of our gas would seriously constrain Canada’s options.

Not only that, but with the US backing out of its Paris commitments, Canadians may be concerned about exporting an unchanging proportion of oil and gas to a country that is not actively working to reduce its own GHG emissions, while we work to further reduce our fossil fuel use.

Phasing out the oil sands and reducing exports, while maintaining some flexibility in Canada’s current energy usage patterns, may well be the least painful way to reduce emissions. It could also buy governments some time to ease the transition for workers employed in fossil fuel-dependent industries.

But Laxer explains that the NAFTA proportionality clause prohibits this scenario. Canada cannot reduce fossil fuel exports to the US while using our remaining energy supplies to ease the transition to a post-carbon economy, because this would change the proportion of our energy resources that are exported to the US versus those used at home.

When it comes to GHG-reduction policies, the proportionality clause locks Canada into business as usual. But we need policies that are out of the ordinary to meet our Paris Agreement commitments and go beyond them, which is what we actually need to do to keep average global warming below 2 degrees. Phasing out the oil sands would be a giant leap in the right direction, and the proportionality clause gets in the way.

Dislike for the proportionality clause is one of the few things that commentators on both ends of the political spectrum can agree on. And unlike the ISDS mechanism, which enjoyed wide uptake in other trade agreements after being introduced in NAFTA, no other free trade agreement since NAFTA has incorporated a proportionality clause-type provision. NAFTA is the only example of a trade agreement in which an industrial country has signed over first rights to its energy resources to another country.

If nobody likes the proportionality clause, it begs the question of why we signed on to it in the first place. The answer is fairly simple: the US didn’t want Canada to reduce exports as we had in response to the oil crises of the 1970s, and we thought it was a good deal for us at the time.

The proportionality clause was first included in the 1988 US-Canada free trade agreement that preceded NAFTA and it got rolled into the new agreement. Back then – as today – the US was our major export market for oil and gas and the American appetite for imported energy seemed insatiable. To Canadian decision-makers of the time, it appeared to make sense to lock in guaranteed access to the US energy market.

None of those assumptions now hold. In fact, the International Energy Association projects that the US will no longer be a net energy importer by 2040. What will that mean for the proportionality clause?

In a renegotiated NAFTA, we need to get rid of this outdated, overly constricting clause. And if NAFTA renegotiations fail, then we should not sign on to any trade agreement that includes a proportionality clause in the future.