Wading into the science on sea level rise – BC lags behind 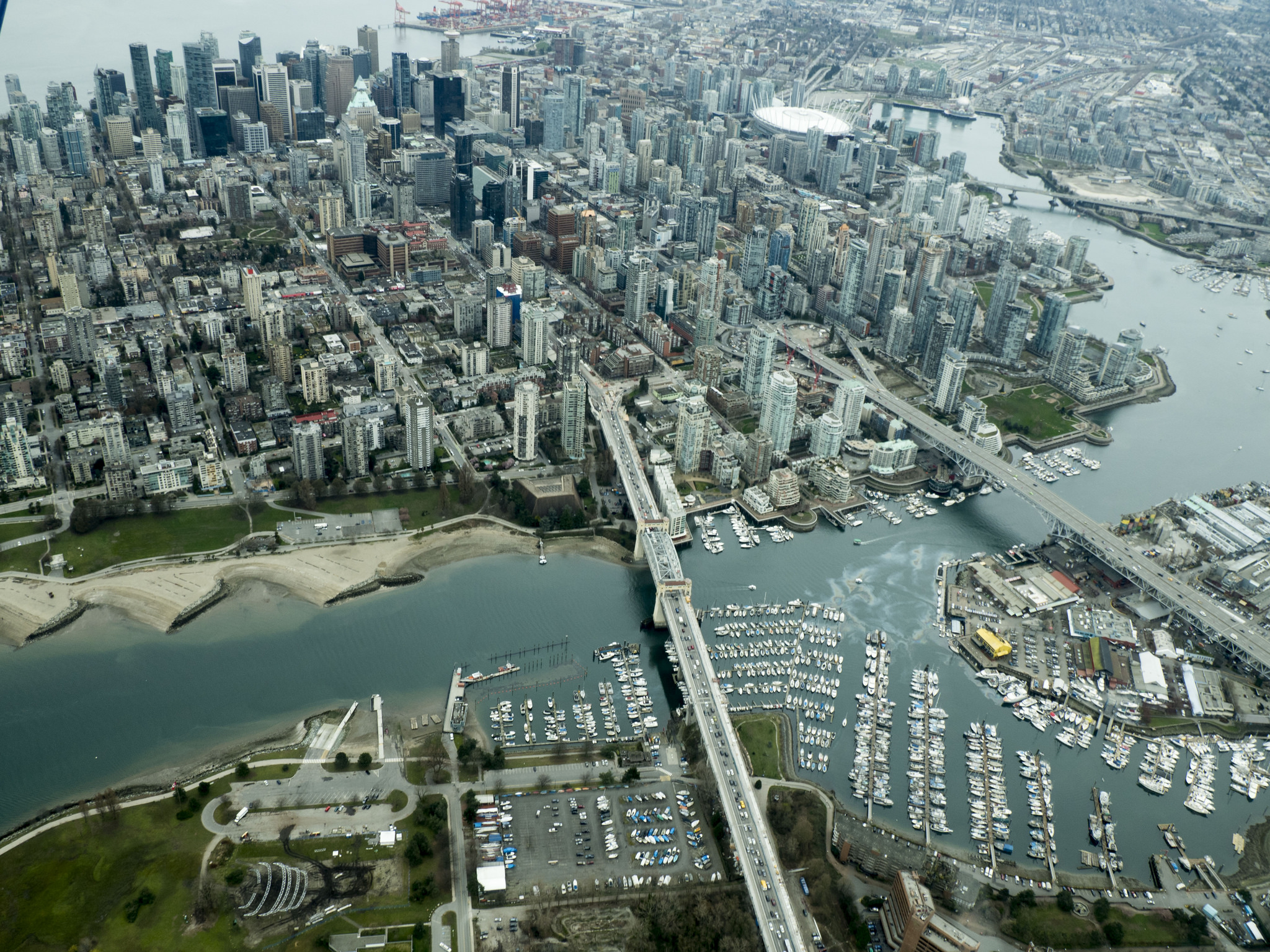 British Columbia has over 27,000 kilometres of coastline, and more than 170 cities, towns and villages along the coast, with around 75% of our population living in the Lower Mainland and southern Vancouver Island. Sea level rise is a big deal in British Columbia. Of course, some areas are more vulnerable than others – for instance, the provincial government estimated that the Metro Vancouver region might need to spend $9.5 Billion between now and 2100 to address rising sea-levels.  And just last October, Vancouver City Council was presented with information about adaptation options that included an $800 million storm surge protector for False Creek.

If you’ve been following BC’s sea-level woes extra closely, you’ll know that planning for a sea-level increase of “1 metre by 2100” has become a kind of mantra for local governments and others responsible for planning and readying our communities. The immediate source for the 1 m figure and 2100 time frame is guidance produced by the Province back in 2011. (More about that later.)

While a one metre increase in sea-level rise may seem substantial, we’re worried that the figure is out of date and ignores more recent science and the benefits of a precautionary, risk management approach.

In particular, over the past couple of years we have followed legal developments on the east coast of North America, where Hurricane Sandy provided a wake-up call to coastal property owners, insurers, and government agencies about the vulnerability of coastal communities to storms and flooding. Recent studies and policy developments coming out of California are also instructive.

State of New York regulators listen to the scientists

Climate change will lead to more frequent and intense storms, as well as sea level rise, so perhaps not surprisingly Hurricane Sandy seems to have convinced regulators that they needed to take preparing for climate change more seriously.

In 2014 the State of New York introduced new legislation, the Community Risk and Resilience Act, designed to ensure that state agencies began preparing for new coastal flood risks associated with sea level rise and climate change by incorporating the science into permitting and funding decisions. The Act also mandated the development of ‘Guidance on Natural Resiliency Measures.’

This February the State issued regulations that specify new numbers for sea level rise. After consultation with scientists and others they opted for a range of low to high projections, depending on the success of global efforts to reduce greenhouse gas emissions, and how quickly polar ice sheets melt, among other factors. The high projections come in at approximately 6 feet by 2100, or close to 2 metres. As justification for the higher range, NY regulators pointed out that new science related to the melting of the polar ice sheets makes this a possible outcome relevant for planners considering major land-use decisions or the construction of critical infrastructure:

Recently published research confirms that [rapid melt of land-based ice on Antarctica and Greenland] is occurring and could result in high rates of sea-level rise, especially if greenhouse gas emissions continue unabated. The adopted regulation includes high projections of approximately six feet of sea-level rise by 2100. Many scientists fear that the likelihood of this rate of sea level rise--or even more--will increase dramatically if current plans to reduce greenhouse gas emissions from power plants and vehicles are curtailed at the federal level.

This is not to say that projections for sea-level rise on the US Atlantic coast can automatically be transferred to BC’s Pacific Coast, but it does reflect a growing sense of urgency among scientists.  It also highlights increased understanding that we need to apply a precautionary, risk management approach to ensure that our decisionmaking for coastal areas does not set us up for future problems.

After reading OPC-SAT’s recent report, BC’s 1 m by 2100 number seems very optimistic. The California scientists confirm that we should be seriously considering, not just noting, the potential impacts of the Western Antarctic Ice Sheet collapse later in this century which will particularly affect the west coast of North America.

One of the key findings from the report states:

The report not only digs into the science, it considers how to make it relevant for regulators.

The California report provides the framework for including science into longer term decisionmaking, and addresses the uncertainty. The OPC-SAT outlines an approach that allows planners and regulators to consider what amount of sea level rise to prepare for, depending on how likely it is that sea level rise will hit various levels at given times, and the risk tolerance for a particular community or infrastructure facility. A series of tables provide probabilities for different rates of sea level rise under the low and high emissions scenarios. 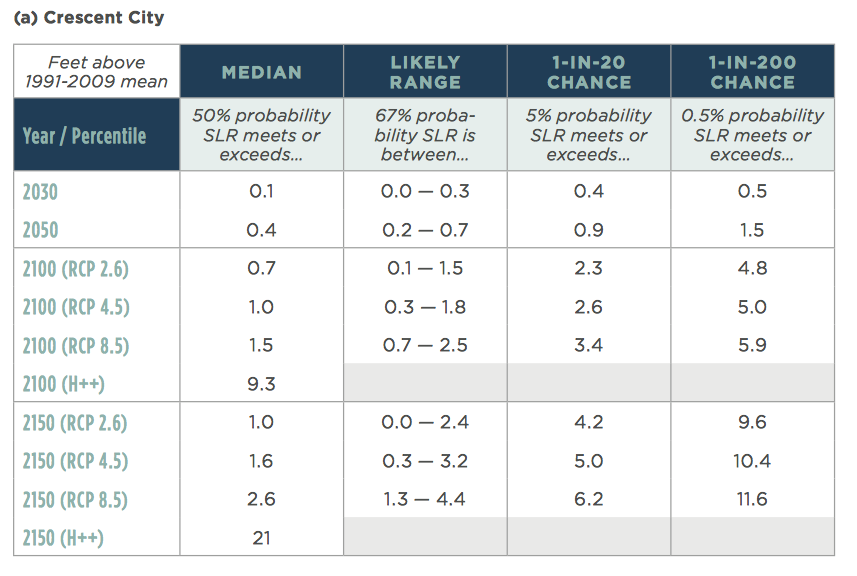 With this information, California state regulators and local governments will be able to take a risk-based approach to coastal land–use decisionmaking, and incorporate the latest science into their decisions in a meaningful and transparent way. Of course, there will still be choices to be made about appropriate responses

As the report explains:

These projections of future sea level and changing coastal hazards can and should be used along with a comprehensive assessment of what is at risk (i.e. exposed to future coastal hazards) and what is at stake (i.e., the monetized and non-monetary values attached to what is exposed) to weigh the different types of costs, and potential losses and benefits of taking action now to prevent future harm against the wide-ranging risks of inaction.

A risk-based approach to flood management is already in place in the Netherlands, where highly developed areas are protected for 1 in 10,000 year events (0.01% probability), while other areas considered more resilient to flooding are protected to a lower standard.

In California, as in New York, new state law requires cities and counties to incorporate climate change preparedness into planning.

In BC, we’ve been told that the 1 m figure first proposed in 2008 is generally still a good number, and even provides some extra margin. At the same time, following the most recent IPCC Assessment Report (the Fifth, from 2013), a 2016 report from Natural Resources Canada also included consideration of Western Antarctic Ice Sheet collapse and suggested this would add 65 cm to the relative sea levels anticipated under the highest emission scenario by 2100.

Currently, the Province of BC web page on sea level rise notes that

However, the link to the web page with more data is broken, so it isn’t clear where these numbers come from, and whether they include the possibility of Antarctic ice sheet collapse, or, more likely just reflect regional differences in relation to the 1 m number. (Because the land around the Province is sinking in some places and rising in others, relative sea level rise varies.)

In addition, BC provincial guidance explains how high dikes have to be, and how far above the ground buildings need to be (the technical term is ‘flood construction level’ or FCL) relative to sea level. This has left local governments scrambling. Some have raised their FCLs, some have not. It is a blunt tool that could work reasonably well for new development and new infrastructure in greenfield or larger redeveloped areas, particularly if the risk of flooding was going to be static over time.

However, it does not address existing structures, or infrastructure: if you gradually raise up some buildings as neighbourhoods are redeveloped, what happens to adjacent buildings, roads and sidewalks? Nor do FCLs offer any nuanced opportunities to consider different approaches in different locations or for different land uses.

Further, local governments are left on their own to consider whether longer term shifts in land use should be on the table, even where important infrastructure like highways, railways and utility corridors managed by other authorities is involved. Presumably it will not always make sense to keep rebuilding at higher levels in the same, flood-prone location.

Less than ‘likely’ but still important for safety, and long term land use regulation

What’s more, in looking at these important issues, local governments and other regulators in BC are lacking the full range of information about future sea level rise that California is giving to its regulators.

As the NRCAN report describes, the IPCC climate projections on which BC’s 1m by 2100 guideline is based represent a range of ‘likely’ outcomes under different emissions scenarios (the scenarios are based on how successful we are at reducing greenhouse gas emissions and slowing the rate of climate change). The ‘likely’ part represents a probability of 66-100%. (See also the ‘likely’ range in the table reproduced above from the California report).

For certain conversations it can be helpful to know what is most likely to happen.  But when we plan for risks related to natural hazards, we are also interested in the ‘somewhat less likely’ cases – cases in which an unlikely event can cause huge human and financial losses.

For example, the general standard for flood protection from an engineering perspective in BC, before we even started worrying about climate change, has been to prepare for the 1 in 200 year flood, which has a 0.5% chance of happening in any given year. Not very likely, but potentially devastating if it affects your home, major roads, utilities, etc.  For example, the current floods in BC’s interior have been referred to as a 1 in 200 year flood event. The California table reproduced above has a column illustrating 0.5% risk.  As noted above, BC rounded up the IPCC ‘likely’ numbers to include further risk, but roughly to the 5% column. Does that go far enough, where potential consequences of coastal flooding are extreme, from a safety and cost point of view?

To sum up, at present our provincial sea level rise guidance seems to be based on 2008 climate projections, it probably does not include new science about the West Antarctic Ice Sheet, and it takes into account a relatively narrow slice of what scientists know to be possible. And it neglects to provide guidance about natural resilience options that involve protecting and restoring coastal ecosystems, even though these solutions have been demonstrated to make coastal communities more resilient to climate impacts such as flood risk.

In short, it might not be providing all the information necessary for prudent risk management.

It seems fair to ask when BC will be updating its sea level rise guidance, and whether it is going to consider guidance that would allow robust risk management approaches. Larger local governments may be able to take on some of this work independently, but for most communities it will be out of reach. Without this information and support local governments and provincial regulators will struggle to make the informed decisions that are needed to protect coastal ecosystems and safeguard coastal communities.

Photo: Coastal cities like Vancouver are particularly vulnerable when it comes to sea level rise. By Scott Kirk.