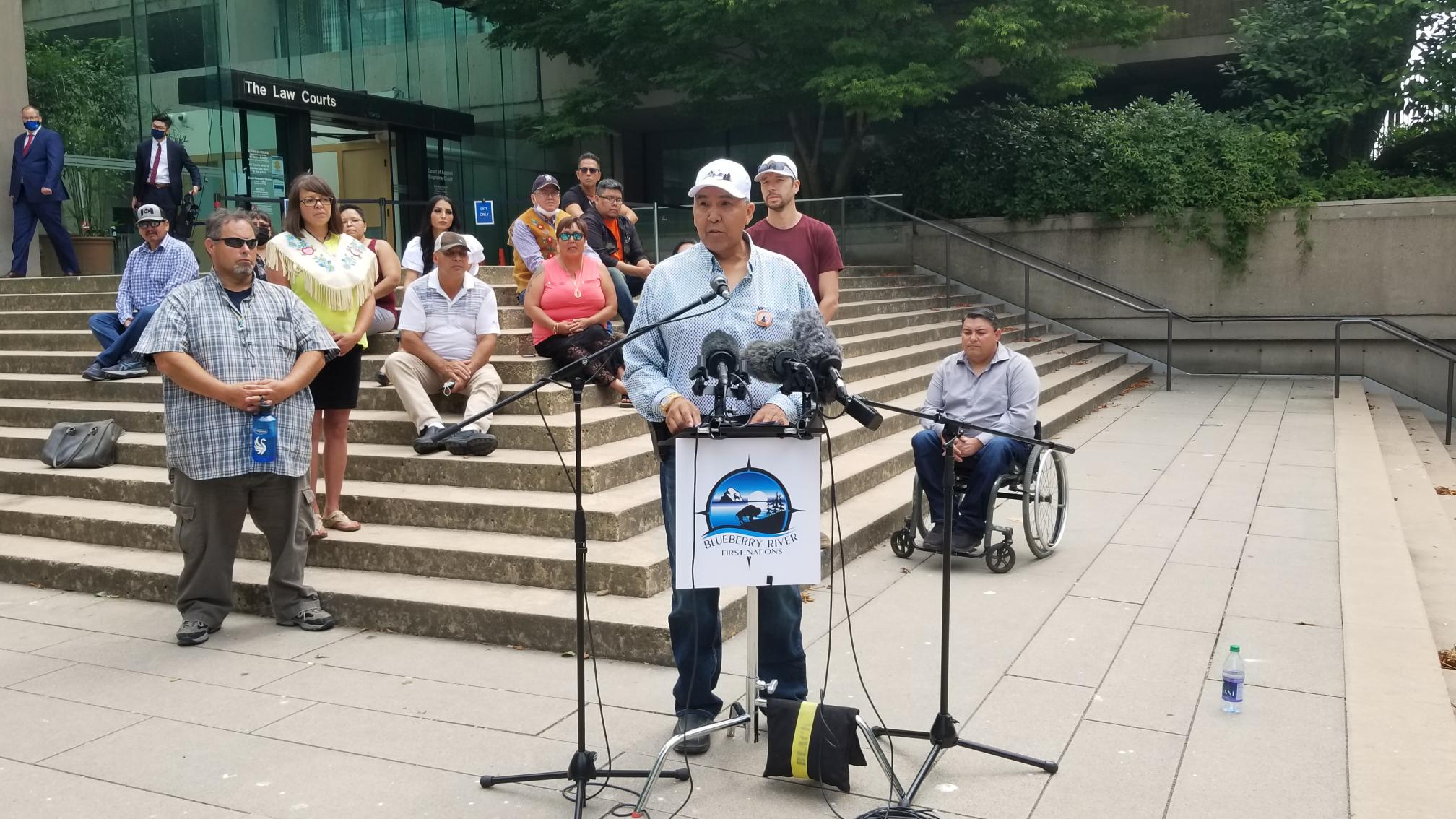 On June 29, 2021, Blueberry River First Nations (“Blueberry”) won a ground-breaking case that provides urgent legal direction to the Province to stop the “death by a thousand cuts” resulting from its disconnected, piecemeal approvals for activities like logging, oil and gas development, dams and mining, in order to respect the constitutionally-protected rights of Indigenous peoples.

In Yahey v British Columbia, the British Columbia Supreme Court finds that the Province has violated its treaty obligations to Blueberry not by virtue of a single project or decision, but rather “by allowing industrial development in Blueberry’s territory at an extensive scale without assessing the cumulative impacts of this development and ensuring that Blueberry would be able to continue meaningfully exercising its treaty rights in its territory” (para 3).

The Court prohibits the Province from continuing to authorize activities that breach its treaty promises to Blueberry (the prohibition will kick in six months from the judgment), and orders the parties “to consult and negotiate for the purpose of establishing timely enforceable mechanisms to assess and manage the cumulative impact of industrial development on Blueberry’s treaty rights, and to ensure these constitutional rights are respected” (para 1894).

Barring a successful appeal (at the time of publication the Province has not yet announced whether it will appeal), this case will have profound and long-lasting implications in a number of ways. Observers have noted the importance of this case in holding the Crown accountable to meet its treaty obligations to Indigenous peoples, while others have flagged the ramifications for BC’s natural gas ambitions as well as the Site C dam.

West Coast has published a case comment taking a deep dive into what this case means for broadly transforming the way the Province manages (or fails to manage) the cumulative effects of human development.

In this blog we summarize our analysis on three key issues related to the Yahey case: (1) the Court’s findings on the profound failure of the Province’s current approach to cumulative effects; (2) how the Yahey decision builds legal pressure on the Crown to transform its decision-making and stop the “death by a thousand cuts” occurring throughout BC; and (3) the wealth of opportunities that exist to confront death by a thousand cuts with strong new legal tools.

The Court in Yahey states:

“I have concluded that the provincial regulatory regimes do not adequately consider treaty rights or the cumulative effects of industrial development” (para 1880).

In arriving at this conclusion, the Court undertakes a detailed analysis of four areas of the Province’s legal and policy regime related to cumulative impacts – oil and gas, forestry, wildlife management and BC’s Cumulative Effects Framework – finding significant failures and shortcomings with each.

In addition, the Court identifies overarching failings in BC’s approach to cumulative effects, which go beyond any one policy, law, Ministry or industry. Key flaws identified by the Court include:

More detail on these points is set out in our longer case comment, with excerpts from the Court’s eviscerating findings about BC’s failures to manage cumulative effects (including a remark from Justice Emily Burke comparing BC’s approach to cumulative effects to the novel Catch-22).

2) What does the Yahey decision mean for stopping “death by a thousand cuts” throughout BC?

Regardless of whether it appeals, the BC government will not want to admit that its massive failure to manage the cumulative effects of development applies throughout the province, because that would require the Province to fundamentally change (read: strengthen) its legal regime throughout BC.

However, by virtue of the Court’s very thorough and often scathing analysis of BC’s approach to managing cumulative effects, it will be difficult for the Province to contain and geographically limit the transformative change that this case requires. Indeed, other legal commentators have similarly observed that “[t]he effects of Yahey will likely not be confined to northeast B.C.”, and that this case and others like it “could significantly change the future of resource and infrastructure development in Canada.”

The Yahey decision has broad implications for transforming Crown decision-making to account for the cumulative effects of human development, and to stop “death by a thousand cuts”, in light of a combination of at least four factors:

In this light, the Yahey decision significantly adds to legal pressures on the Crown to take meaningful action to respect Indigenous decision-making, as well as proactively address the big picture of the cumulative impacts of its approvals. Failing to do so will increase the legal risks (not to mention injustice) caused by the Crown’s further and ongoing infringement of Indigenous nations’ constitutionally-protected rights.

The Court in Yahey concludes “[i]t is critical that the Province have a way of assessing and managing the cumulative effects of development” (para 1776), and its order emphasizes the need for “timely enforceable mechanisms to assess and manage the cumulative impact of industrial development” (para 1894, our emphasis). While the Court’s judgment is focused on Blueberry territory, such “timely enforceable mechanisms” to address cumulative effects, and confront the considerable legal and systemic failings summarized above, are also seriously needed throughout BC.

Fortunately, as West Coast has previously emphasized, there are already practical legal options and approaches available to manage cumulative effects. These approaches can be co-developed with Indigenous nations in a manner tailored to the needs and circumstances of the communities and ecosystems in their territories.

A number of existing commitments made by the Province, as well as the federal government, provide significant opportunities for the Crown to work with Indigenous nations to fix its broken approach to cumulative effects and implement the timely, enforceable mechanisms envisioned by the BC Supreme Court. All that is needed to do so is the will on the part of the Crown to fully live up to its own promises.

While by no means an exhaustive list, these opportunities include the following:

More detail on these opportunities is set out in our case comment.

In Yahey, the Court calls out the Province for a persistent pattern of delay, deflection and half-measures, and creates a legal hammer to finally require strong, enforceable mechanisms to address cumulative impacts on an urgent timeline. This should serve as a wake-up call for the Province that the status quo is no longer an option, and that it will face growing legal risk if it continues its inadequate, piecemeal approach to cumulative effects in BC.

The Court is requiring the Province to take a fundamentally different approach – and this transformation is achievable. Pathways exist to develop effective, enforceable legal tools and approaches to manage cumulative effects in a manner that respects Indigenous governance. This includes opportunities presented by a number of the Crown’s existing commitments, if implemented meaningfully. In the face of growing biodiversity and climate crises, what is needed from the Province is the political will to follow those pathways and seriously address cumulative effects.

As the Court puts it in Yahey: “[t]he delay in implementing such legally enforceable commitments must therefore come to an end.”